On Sunday we visited Claremont Farm near Bebington in mid-Wirral for the ‘Farm Feast 2014’, the new name for the Wirral Food and Drink Festival. The festival is held on a working farm and as it had rained hard over the preceding days the fields were a little muddy.  The rain stayed away until late afternoon but you still needed wellies to get around. 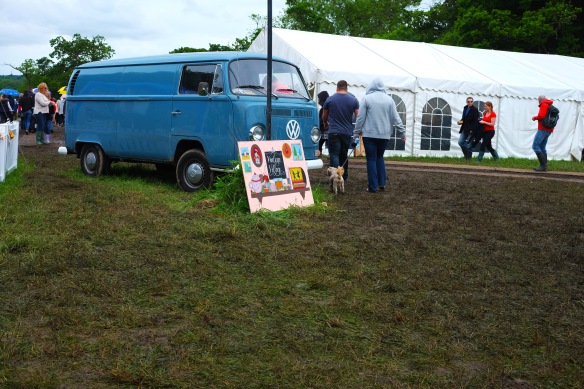 There were hundreds of stalls selling all kinds of locally produced and artisan made foods from across the North West.

There were also demonstrations by celebrity chefs.  I caught Brendan Lynch a baker and finalist in last year’s BBC TV ‘Great British Bake Off’.  He’d finished his demonstration and was judging a cake making competition.

This year there were three sound stages featuring a number of artists from around the region.  Whilst I was there Liverpool band City Walls performed on the on the main stage.

Liverpool folk artist Mikey Kenney was on the Courtyard stage as we sampled the delights of the food and drink stalls in the light drizzle. 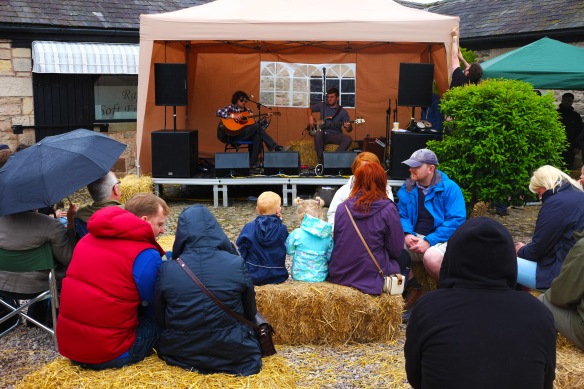 The annual ‘Museums at Night’ festival gives visitors free access to museums from sunset onwards along with special one-off events around the UK.  It ran from Thursday 15th to Saturday 17th May.  On Friday night the annual ‘Light Night Liverpool’ took place as part of this national event.

As well as access to museums, art galleries, exhibitions and special performances there were a range of events out on the streets.  I tried to get around as many as I could with my camera.  I decided to leave my tripod in the car and walked around the city taking some handheld shots which meant I have had to really push the ISO film speed settings on my camera.

The one-night event celebrates the city’s arts and culture scene in over 50 venues across the city with many of the events adopting a World War I theme as 2014 marks the 100-year anniversary of the outbreak of the First World War.  There are further events planned in the city to mark the start of the ‘Great War’.

There were thousands of people in the city along with the usual night time revelers who were packing the bars and clubs.  There was a tremendous atmosphere around the city as people made their way around the venues, taking in the sights and sounds of Light Night.

There were two ‘Light Night projections’ one shone on the Bluecoat building, an arts centre in one of the city’s oldest buildings in the centre of town and the second on the Bell Tower of Liverpool’s Metropolitan Catholic Cathedral. The two projections paid tribute to the centenary commemorations of World War One showing how the war was reported back on the ‘Home Front’. 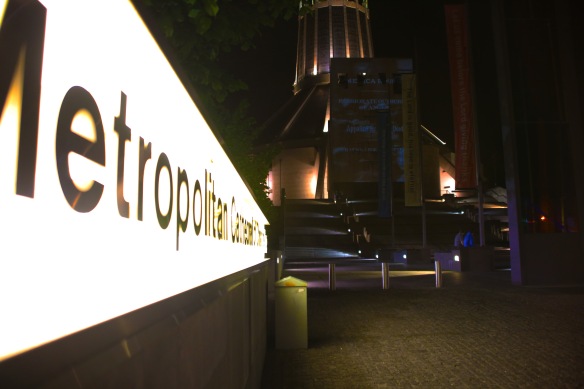 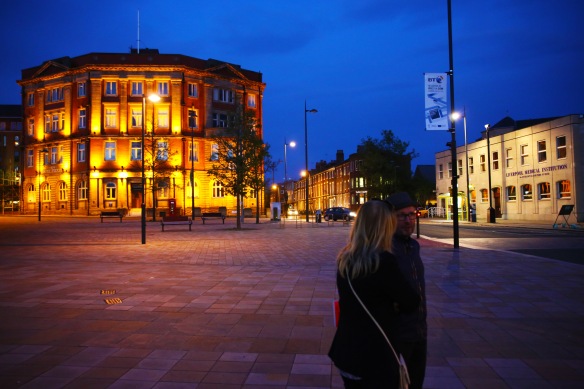 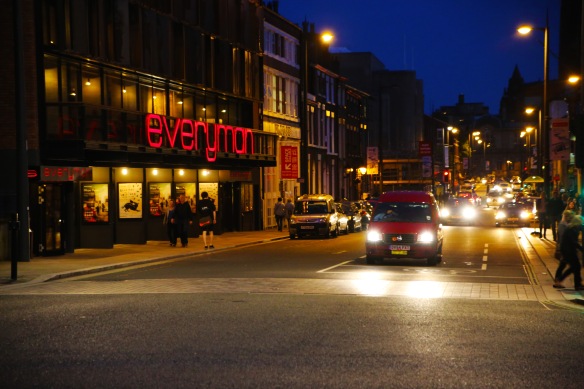 The Catholic Cathedral is in the university quarter and university buildings and the Everyman Theatre were all lit up adding to the atmosphere as the light started to fade and the projections switched on.

The First World War was the first total war, with the whole nation mobilised behind the campaign.  Men enlisted to the army while women took on jobs in industry to keep the country running and to help the ‘war effort’.  The projections convey the sense of optimism for the war through archive photographs, postcards, newspapers and other memorabilia. 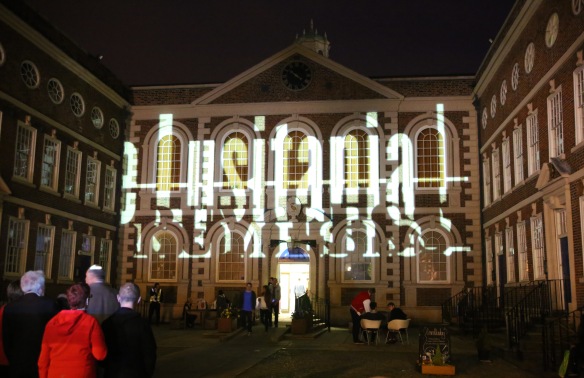 At the Bluecoat the voice of David Charters, a former Liverpool Daily Post journalist known as the ‘Bard of Birkenhead’ was played reading his play ‘A Dream of Wilfred Owen’ alongside the slide show.  Wilfred Owen lived in Birkenhead and as well as a soldier he was one of the leading poets of the First World War. 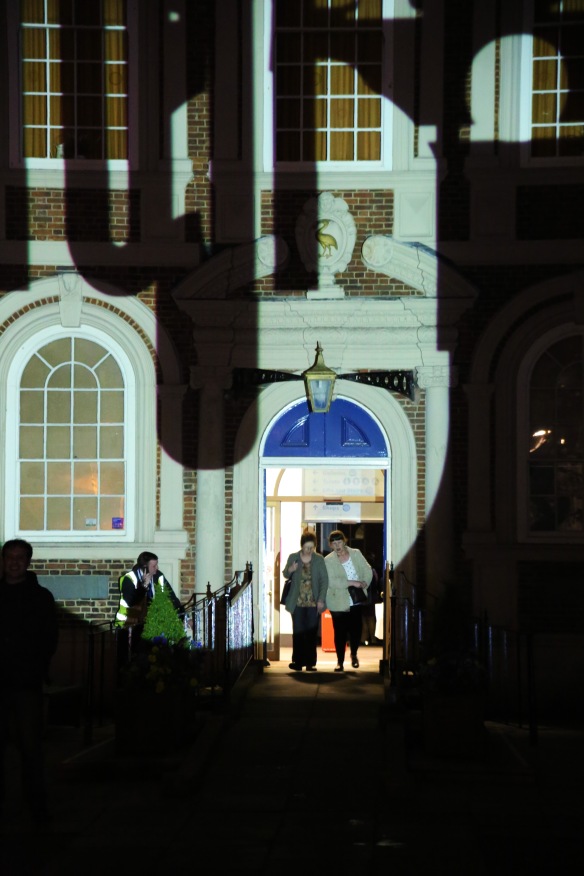 Blackburne House is a Grade II listed building, situated in Liverpool’s Hope Street quarter.  It is a centre of education for women as well as hosting range of social enterprises.

The labyrinth is a design by Gareth Price from Reddoscar, who has designed and built labyrinths for the LightNight Festival over the last four years.  It is supported by LIPA, Blackburne House and Liverpool LightNight 2014.

The public were encouraged to take a walk under the stars, through the candle-lit labyrinth, in the setting of Blackburne House.  The labyrinth is an ancient symbol of creativity and mindfulness and as the organizers say ‘testament to the creative spirit of Liverpool and its community’.

It was still light at 8.30pm when I captured some images of the event here.

Friends of the Flyover and BEGA ‘Lighting the Way’ exhibition

The Churchill Way flyover runs from Islington, past Central Library, Walker Art Gallery and the World Museum through to Dale Street.  It was built in the early 1970s and won a Concrete Society Award in 1971.  It is the only surviving part of a wider plan to give Liverpool an urban motorway network in the 1970s which would have seen the M62 brought through the city centre right down to the docks on the banks of the River Mersey. 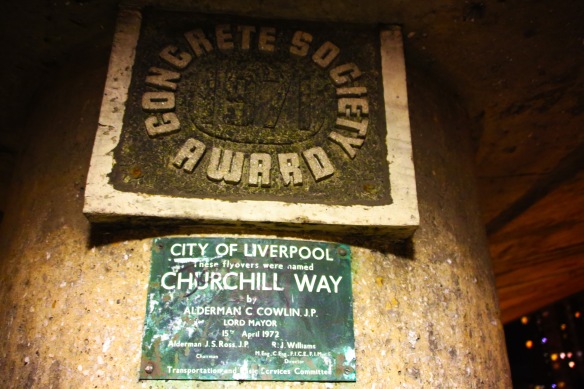 Liverpool City Council has proposed demolishing the flyover in its future planning strategy however the ‘Friends of the Flyover’ has raised £40,000 through a crowd funding website.  The group was set up after the city’s 2012 Strategic Investment Framework proposed the removal of the Churchill Way flyover. 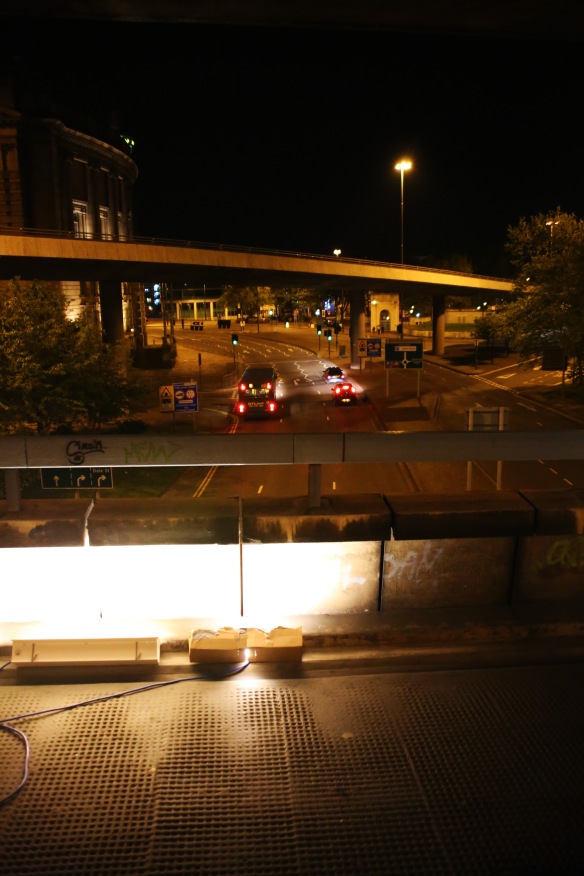 The group plan to transform the unloved concrete structures into a cycle and pedestrian-friendly parkway with arts spaces, landscape gardens and coffee shops.  The project has been compared to New York’s High Line a linear park built on the site of an old railway, which has revitalised part of Manhattan’s West Side.

For Light Night the Friends of the Flyover invited members of the public to join design professionals and students to create a temporary lighting installation on the walkways of Churchill Way Flyover to see how light can transform spaces.  The event was hosted with Zumbtobel and BEGA lighting companies.  There were some rudimentary lighting units and ‘art installations’ along the walkways. 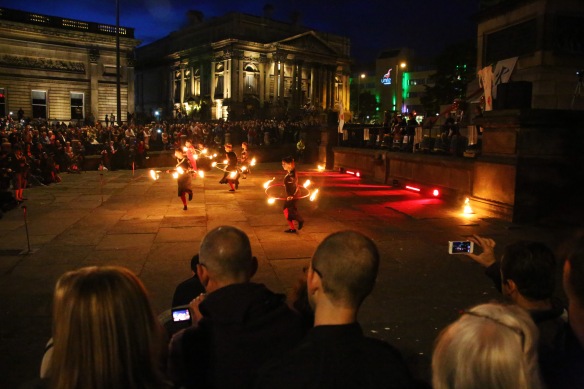 Bring the Fire Project is a Liverpool based collective of fire performers, circus skills teachers and flow arts promoters and they are first fire dancing group based in the city.

Their performance comprised of live drumming, fire costumes and dancing with a mixture of elements taken from Japanese traditions.

The troop use a variety of costumes and fire apparatus to turn their performances into a symmetry of patterns combining with the human body in motion.

Fire dancing is a stunningly beautiful art form, which is gradually growing in popularity, and they believe that now is a good moment to provide people with the chance to discover, practice and perform in Liverpool.

Bring the Fire Project were accompanied with live drumming from TaikoDragons, a Wirral based organisation who teach, share and showcase the ancient art of Japanese Taiko across Wirral and Merseyside

TaikoDragons is supported by Merseyside Police as an activity designed originally to provide an outlet for young people.  TaikoDragons now work with many sectors of the community including people with special educational needs, those with sight and hearing limitations, the elderly and many more sectors within the community.

I did not get a great vantage point but managed to capture some elements of the event which took place at Wellington’s Column outside the Walker Art Gallery where many spectators headed after the performance.

As well as the special Light Night exhibitions there were some old friends lit up in the Liverpool night sky, including the Radio City Tower photographed from Mount Pleasant. 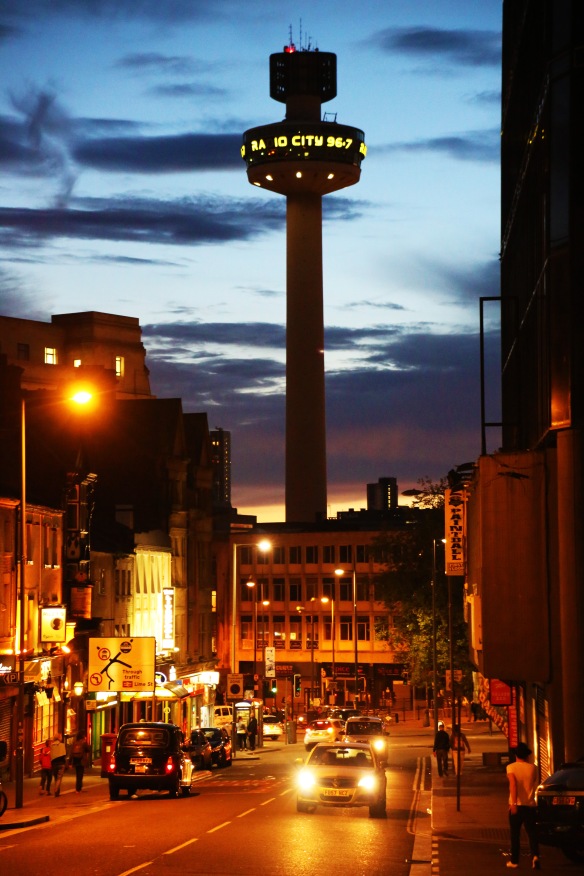 Close to the village of West Kirby in Wirral are three tidal islands lying at the mouth of the Dee Estuary, Little Eye, Middle Eye and Hilbre Island which have been designated a Local Nature Reserve.

On an overcast May Bank Holiday Sunday we set off late morning to walk to Hilbre Island by way of Little Eye and Middle Eye the two smaller islands in the chain.  The islands are cut off from the mainland by the tide for up to 5 hours out of every 12 hours. The aim was to walk there and back during the low water period. 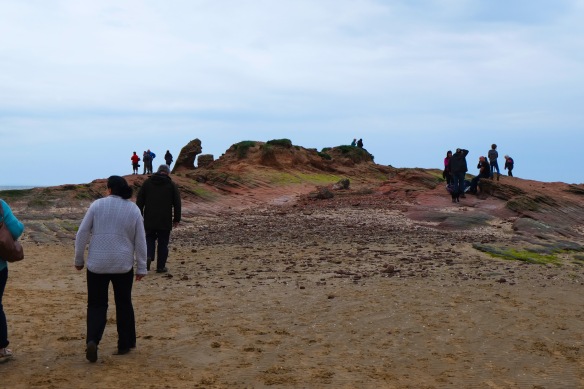 We walked around the Marine Lake in West Kirby to the Dee Lane slipway making a direct line to Little Eye.  The tide had gone out around 9am but we were a little late in starting and you need at least three hours before the next high water to make the crossing over the sands to Hilbre Island and to complete the journey there and back safely. 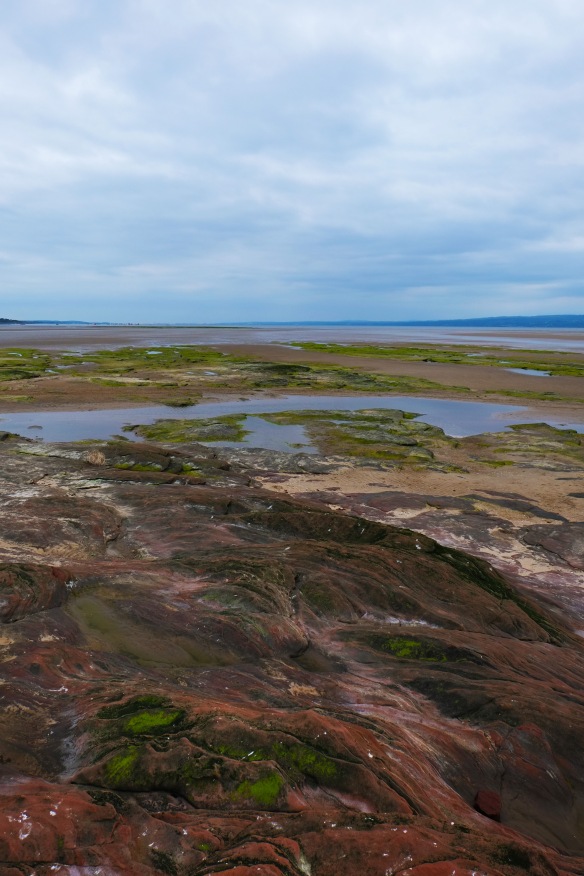 It was 1.15pm as we got to Little Eye with the next high water due at 3pm and we could see the tide coming around the landward side of Hilbre toward Middle Eye.  We decided that we had better head back to West Kirby and a coffee in the cafe on the South Parade.

From Little Eye you can see clearly back to West Kirby, over to the North Wales coast and across to Hoylake further up the Wirral coast. 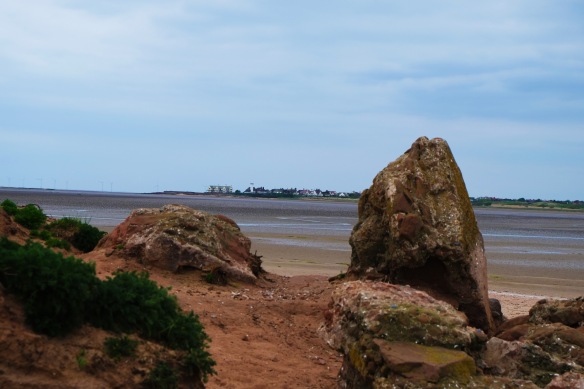 Little Eye is a small outcrop of red Bunter sandstone topped with wiry grasses sticking up out of the golden sands of the Dee Estuary.  The three Hilbre islands have been occupied since Stone Age times with numerous archaeological finds on the islands, dating from the Stone Age, Iron Age, Celtic, Viking and Roman periods.  All that can be seen on Little Eye today of man’s presence are the remains of a brick and concrete moorings long since abandoned with a substantial iron bolt remaining defiantly in place.

Hilbre Island has many more relics from later periods of history but that story is for another day. 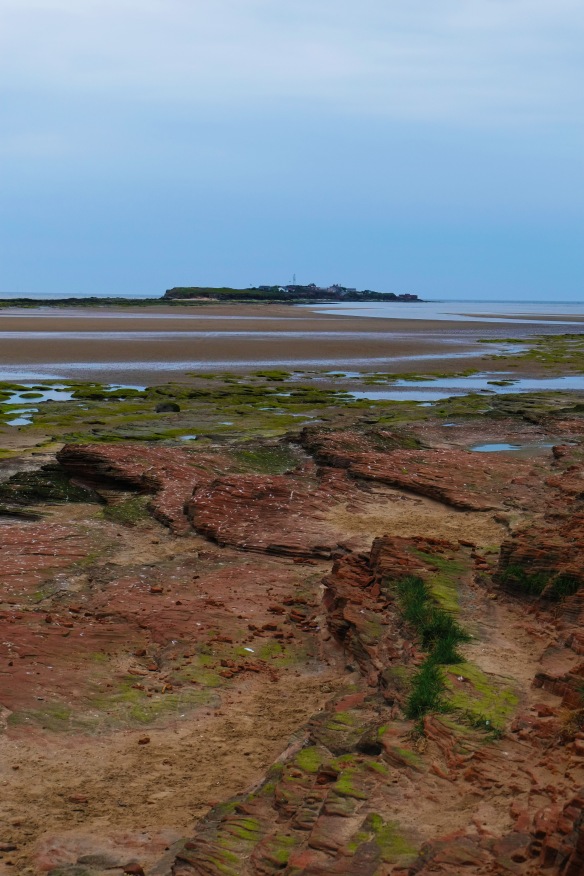