Anyone coming into Liverpool driving down Scotland Road or coming out of the Birkenhead Tunnel will see a round bronze memorial sculpture on the corner of William Brown Street and the Old Haymarket in front of St John’s Gardens close to Liverpool’s World Museum.  This large round bronze casting is a memorial monument to mark the Hillsborough tragedy.  There are other Hillsborough memorials including one at Anfield, Liverpool FC’s ground; Hillsborough stadium itself; a memorial stone in the pavement on the south side of Liverpool’s Anglican cathedral and there is also a Hillsborough memorial clock frozen at 15.06 which was installed inside Liverpool Town Hall.

The memorial monument is dedicated to the 96 people who died as a result of the Hillsborough football tragedy which took place at 15.06 British Summer Time on 15 April 1989. It was unveiled on the Old Haymarket in a public ceremony, attended by 300 people, on the eve of the disaster’s 24th anniversary in April 2013. 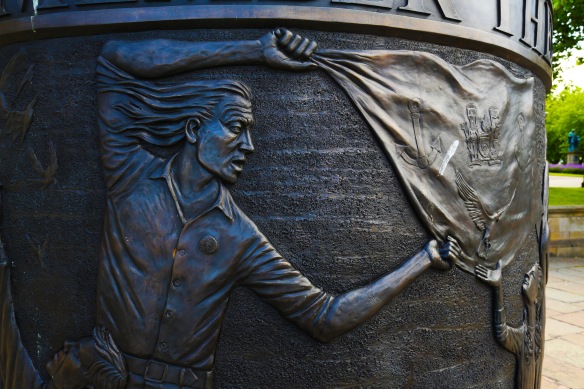 The 96 fans died as a result of a crush within the Leppings Lane terrace of Sheffield Wednesday’s Hillsborough stadium during the 1989 FA Cup semi-final between Liverpool and Nottingham Forest. 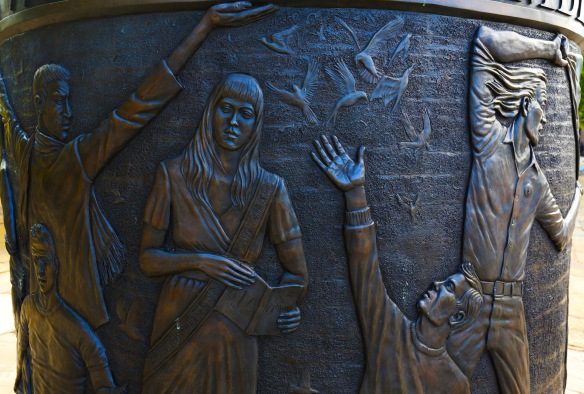 The 1990 official inquiry into the disaster, the Taylor Report, concluded that the main reason for the disaster was the failure of police control.  The findings of the report resulted in the elimination of standing terraces at all major football stadiums in England, Wales and Scotland.  The original inquests found verdicts of accidental deaths for the 96 fans.  Police evidence and some media coverage claimed that the supporters had caused the tragedy by fans pushing in at the back of the crowd.  The families disputed this verdict and following years of campaigning for justice by the families, survivors and supporters a Hillsborough Independent Panel was formed to re-examine the tragedy. 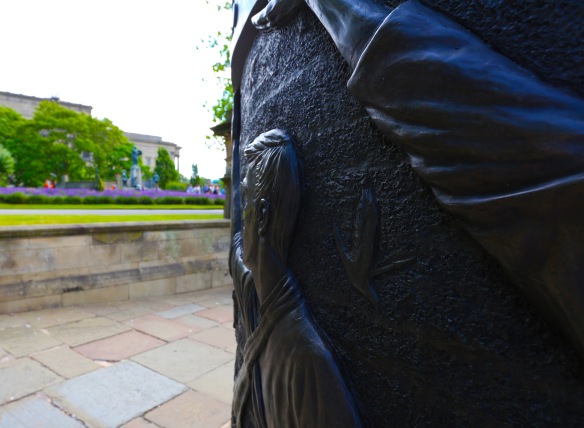 The Hillsborough Independent Panel was formed as fresh evidence came to light and the new panel concluded in September 2012 that Liverpool fans were not responsible for the deaths and that attempts had been made by the authorities to conceal what happened, including the alteration by police of many statements relating to the disaster.

The report revealed multiple failures by the emergency services and other public bodies that contributed to the death toll. In response to the panel’s report in December 2012 the High Court quashed the original inquest verdicts and a new inquest was granted.  The new inquest started its work on 31 March 2014 and is currently still hearing evidence. 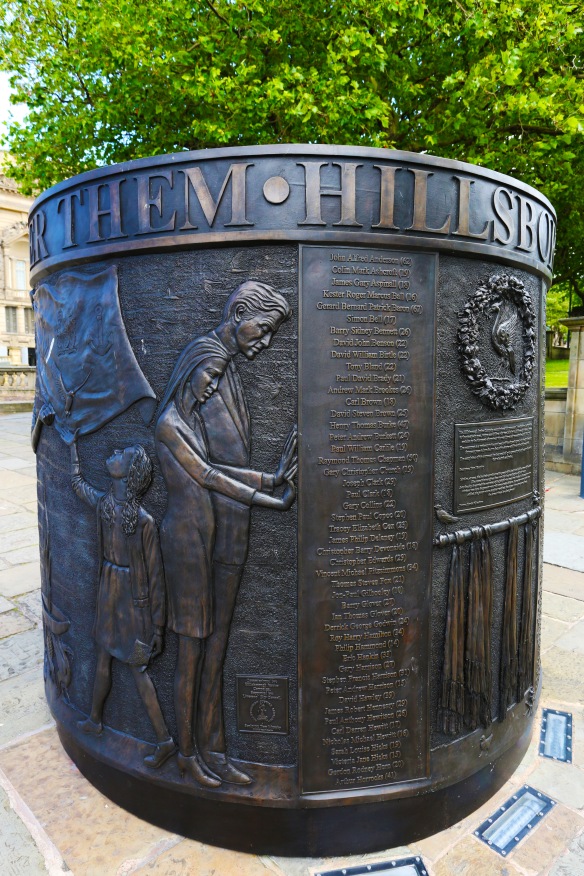 The memorial monument is a 7ft or 2.1m bronze structure and features the words “Hillsborough Disaster – we will remember them”, along with the names of all 96 Liverpool FC supporters who died.

Family members of those who died were the first to be allowed to view it and some touched the individual name of their loved one.

The Hillsborough monument was commissioned by the Hillsborough Justice Campaign and sculpted by local artist Tom Murphy who has a number of his works around the wider Liverpool area, some of which I have previously photographed and published articles on here in the past.

His sculptor’s notes which can be found at: http://www.liverpoolsculptures.com/site/the-hillsborough-monument-memorial/ tells the full story of the design of the memorial monument.

He states that the background to the sculpture was hearing Rosie a young girl who asked her father “where is the Hillsborough Memorial?”  She was told that there was one in Anfield and she replied: “Why can’t we have one in the city centre for everyone to see.” This simple question was the catalyst for this monument.

Tom describes the people depicted in the design as ‘the guardians of the memory’, or ‘people like us’.  Their purpose is symbolic and other figures represent justice, hope and loss.  The setting is a beautiful and quiet place, which may help us to think about the characters and individual personalities of those who died.  The people who passed away are represented by the birds that fly freely throughout the work.  He goes on to say that we reflect and empathise with those who died while considering the people they were, and might have been, were it not for the disaster.  A full description of what each of the fifteen people depicted represent is set out on Tom Murphy’s website.

A poem written especially for the monument by David Charters a local journalist and author is also featured on the monument.

I had been meaning to take some photos of the memorial for some time as I see it when coming out of the Birkenhead tunnel.  Whilst my post does not mark the anniversary, my pictures show it on a summer’s day when we all can feel happy and alive and as Tom Murphy says we can empathise and reflect on what might have been…