It was a sunny morning and I was an early visitor to Birkenhead Priory.

The Priory is the oldest building in the whole of Merseyside.  It was founded around 1150 by Hamon de Masci, who was the 3rd Baron of Dunham Massey as a monastery for the Benedictine Order.  As well as being the oldest inhabited building in the area it has a rich and varied history to tell very closely linked to its position on the banks of the River Mersey adjacent to Cammel Laird’s shipbuilders. The site has recently fully re-opened following extensive restoration work taking place from 2012 to 2015.  The local newspaper the Liverpool Echo have only this month published their ‘Wirral bucket list: 75 things to do in Wirral before you die’ and Birkenhead Priory is listed at number one – they say take in the view from Birkenhead Priory!!  More of that view later. 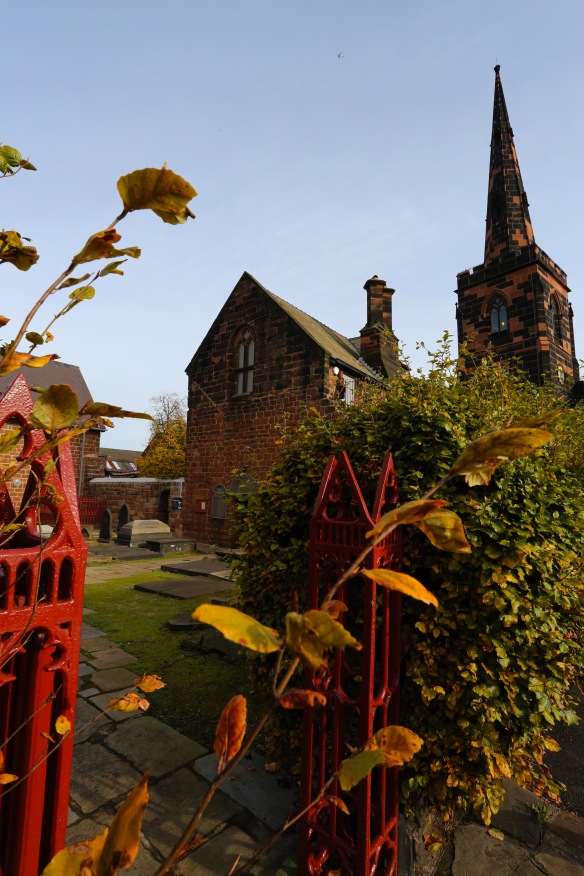 The monks looked after travellers for nearly 400 years operating the first regulated ferries across the River Mersey from the ‘headland of the birches’ when at this time the whole of Wirral was covered in dense hunting forest.  ‘Birchen head’ was to become what we now know as modern day Birkenhead.

The Priory was visited twice by King Edward I due to its strategic importance being close to the borders of Wales and the Irish Sea.  In 1318 the monks were granted ferry rights by King Edward II. This allowed them to build a house in what is now Water Street to store their corn. The house was also used by travellers for shelter if the weather was too bad for the ferry to cross the River Mersey. 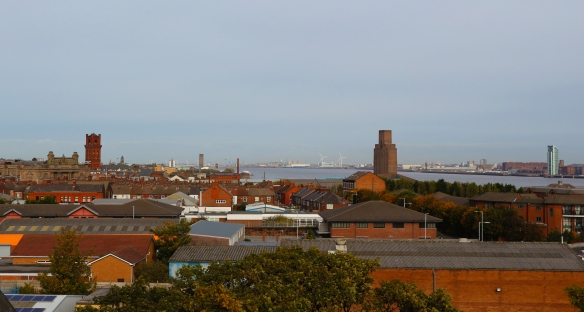 The tower of St Mary’s is all that remains of what was the first parish church of the town which opened in 1821 in the grounds of the priory.  Redevelopment of the area from 1925 resulted in a large amount of housing within the parish being cleared to make way for the construction of the Queensway Tunnel.  At the adjacent Cammell Laird shipyard an expansion of the Number 5 dry dock and the construction of the Princes dock which opened in 1962 resulted in the church losing a significant portion of its graveyard.

Subsequent redevelopment of the approach roads to the Mersey Tunnel effectively cut off the church from most of what remained of its parish, further dwindling its congregation. In 1971 St Mary’s church was closed with most of the church being demolished in 1975 for safety reasons.  Only the former church tower and parts of the outer walls remain. The tower has since been refurbished and is dedicated to those who died on HMS Thetis.  The remaining walls to the church, which would have been its internal walls, catch the early autumn sunlight with their white painted exterior.

The site is dedicated as a memorial to those lost in the 1939 disaster aboard the Cammel Laird’s built submarine HMS Thetis. This was the Royal Navy’s worst peacetime tragedy when an accident happened during sea trials for the new vessel which had sailed out to the Irish Sea off Llandudno from Birkenhead.  There were 103 men on board on 1 June 1939, twice the usual number, with the Royal Navy crew swelled by engineers from ship builders Cammell Laird.  Due to a combination of unfortunate circumstances, sea water flooded in and the boat nosedived and was unable to resurface.  The sinking of the submarine resulted in the loss of 99 lives.  It happened three months before World War II.  The Thetis actually grounded on Anglesey on the day war was declared. Climbing the 101 steps to the top of St Mary’s tower affords you tremendous views down the river and across to Liverpool and you really do get a ‘bird’s eye’ view of Cammel Lairds shipyard next door. 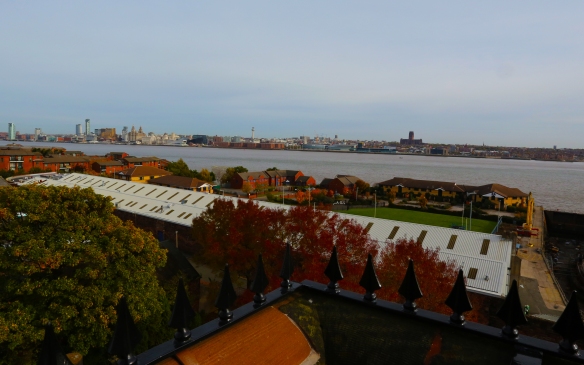 The priory’s chapter house was built in the 1150’s as a meeting place for the monks.  After King Henry VIII’s dissolution of the monasteries around 1540 it was adapted for use as a chapel where it was the place of worship until St Mary’s church was opened in 1821.  Following restoration work the chapel was rededicated as a chapel in 1919 it is currently consecrated as an Anglican church, and is still used for services today. The chapter house is a Grade II listed building containing items of Norman architecture; it was fully restored in 2005.

The Scriptorium was built above the chapter house in 1375.  The original use is uncertain but was probably a place where the monks could read and write on their own.  It was restored in 1919 and was repaired after bomb damage during World War II.

It has a chapel dedicated to the training ship HMS Conway where services are held two or three times a year.  The Scriptorium is the home of the ‘Friends of HMS Conway’.  HMS Conway was founded as a naval training school in 1859 and housed for most of its life aboard a 19th-century wooden battleship which stood in the River Mersey off Rock Ferry.  The ship was moved from the Mersey to the Menai Straits during World War II.

However whilst she was being towed back to Birkenhead for a refit in 1953, she ran aground and was wrecked.  Training of the naval cadets continued in a new camp in the grounds of the Marquess of Anglesey’s residence at Plas Newydd, using his private dock for seamanship and small boat handling.  In 1964 the new HMS Conway, a purpose designed college close to Plas Newydd, was opened however with the running down of the British Merchant Navy and the emphasis being placed on university style nautical training, it was decided to finally close HMS Conway in 1974.  The ‘Friends of HMS Conway’ was established in 1996 to safeguard the many items of memorabilia from the training school and they were allowed to use the Scriptorium as a museum. New stained glass windows have now been installed commissioned by ‘Old Conways’ (former cadets of HMS Conway) and designed by the late David Hillhouse the former curator of Wirral Museums. The furniture and memorabilia were moved from the Conway Centre in Angelsey together with many items donated by ‘Old Conways’ worldwide.

The Frater Range is the second surviving building off the cloisters next to the Chapter House.  A museum detailing the history of the site is housed in the former undercroft.  Undercrofts were storage cellars but this one was very carefully finished which experts believe means it may have been used as a dining room.

The museum has an interesting interpretation corner, a small exhibit by Kate White showing a medieval mason at work.  Stone Masons were paid by each brick they carved so they would mark each stone with their own unique symbol and some of these marks can be seen on the Chapter House.  Before the Twelfth century most buildings were of timber construction; the Priory’s stone design is typical of Anglo-Norman monastic buildings.  However the undercofts vaulted ceilings and pointed arches were a new technique and were early elements of the emerging ‘gothic’ style.

The Refractory above the undercroft on the first floor is a venue space used for craft fairs and the like; it has a modern roof which was installed in 1993. You actually enter the site through the Western Range and through it into the cloisters area.  It is still intact but has no roof.  The two storey building was built after 1250.  It contained a number of rooms: the prior’s living room and bedroom, a monks’ parlour, guest hall and guest rooms.  The Western range and Frater Range were the first buildings to be restored when Birkenhead Corporation acquired the site in 1896. The churchyard contains the burial vault of the Laird family, which includes John Laird (1805–74), Birkenhead’s mayor and first Member of Parliament and co-founder of the adjacent Cammell Laird shipbuilding company.

It is an interesting location for Merseyside’s oldest building sandwiched between Cammel Lairds ship yard, small scale industrial units and a more modern development of offices on the banks of the river.  Next to the ancient sandstone walls are the towering cranes of the shipyard next door.  Some of the older industrial units have not aged as well as the priory. It is interesting to me how we have treated historic buildings in the past.  Since the priory was first built it has been left to ruin for much of the time but has had periods of active restoration.  During the Eighteenth century it was in ruins but it was still a popular visitor attraction.  The industrialisation from the Nineteenth saw the Priory come under more threat but during 1896 to 1898 the Priory saw the Victorian restoration period.  During the 1960s and 1970s the encroachment of the shipyard and the construction of the Mersey Tunnel saw further threat and the Priory falling once again into disrepair.  Some work was undertaken in the 1990s to patch up the priory buildings.  But more recently from 2012 modern day stonemasons have undertaken major restoration works.  The small team from the local council together with local volunteers continue to ensure the site continues to have life for the future.

All in all it was a very interesting day exploring almost 900 years of Wirral’s history in one day.

Error: Twitter did not respond. Please wait a few minutes and refresh this page.