The Olympic torch came to Birkenhead in the Wirral on Friday 1st June.  It was Day 14 of the Olympic Flame’s travels across Great Britain.  On this leg of its journey it had travelled 94 miles through 17 different communities, with 157 torchbearers carrying the flame from Bolton to Liverpool where an evening celebration was to take place at Liverpool’s Pierhead.

The Flame entered Wirral via the Kingsway (Wallasey) Tunnel from Liverpool at around 5.45pm.  The torchbearers ran with it through Birkenhead Park where the Council held a huge sports and fitness jamboree to welcome the Torch Relay to Wirral.  It then went on through the town centre onto Hamilton Square where there was music and entertainment and then finally down to Woodside to catch the ferry across the Mersey back into Liverpool disembarking at the Pierhead.

As I work not far away from Hamilton Square I went along to the square after work to follow the flame down to the Woodside ferry.  There were lots of people lining the streets and the Square was packed.  I didn’t manage to get a very good vantage point and the Police and organisers were keen to move everyone back off the route.  Some had a much better view.

The Olympic Flame stands for peace, unity and friendship.  A very precise ritual for the lighting of the Flame is followed at every Olympic Games.  It is lit from the sun’s rays at the Temple of Hera in Olympia, in a traditional ceremony among the ruins of the home of the Ancient Games in Greece.  After a short relay around Greece, the Flame is handed over to the new host city at another ceremony in the Panathenaiko stadium in Athens.  The Flame is then delivered to the host country, where it is transferred between the 8,000 chosen torchbearers from one torchbearer to another, spreading the message of peace, unity and friendship.  It ends its journey as the last torchbearer lights the cauldron at the opening ceremony in the Olympic Stadium, marking the official start of the Games. The Flame then stays lit until it is put out at the closing ceremony, signifying the end of the Games.

The Olympic Flame arrived in the UK on 18 May 2012 before setting out the next day on its 70-day Olympic Torch Relay, bringing the excitement of the Games to many more communities than just London where the games are being hosted for the third time in modern history.  The organisers say that the Olympic Flame will travel to within an hour of 95 per cent of people in the UK carried by 8,000 torchbearers through 1,019 communities across the country including Birkenhead today.

With this being the Queen’s Diamond Jubilee weekend as well, many people were dressed up in Union Jacks and in party mood ready to celebrate two historic events this bank holiday.

The London Olympic organising committee have chosen some ‘inspirational’ celebrities to carry the Torch in each area but the bulk of the 8,000 torchbearers have been chosen as they have been nominated for the equally inspirational stories of their lives and it was their ‘moment to shine’ as the organisers put it.  The Torch is made up of aluminium alloy perforated by 8,000 circles representing the inspirational stories of the 8,000 torchbearers.  The gold colour of the Torch is to embrace the qualities of the Olympic Flame as the organisers’ describe it being ‘the brightness and the warmth of the light that it shines’.

There is quite an entourage in the Torch Relay.  A crew of approximately 350 people will be working each day of the Relay.  In a convoy of vehicles that includes the Police and Olympic games officials, the Torch Relay bus transports the torchbearers to their starting point and another picks them up.

They are followed by specially adapted lorries and coaches blasting out music with dancers representing the London 2012 Olympic’ sponsors. 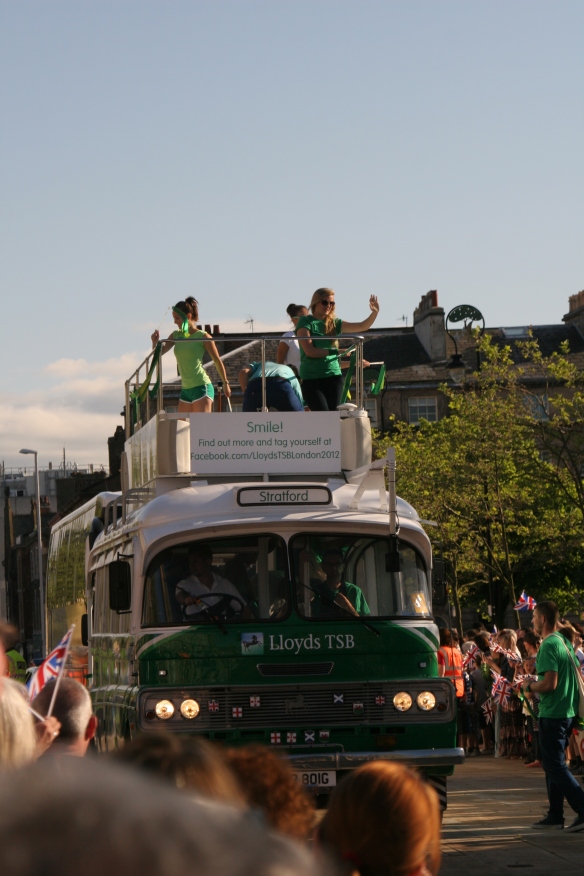 Soon afterwards comes the torchbearer who is flanked by a number of the safety runners from the Met Police wearing their grey running kit who keep an eye on the crowd.

Whilst Wirral Olympian Chris Boardman and pop star Mel C from the Spice Girls carried the Torch around Birkenhead Park the Flame was carried into Hamilton Square by Duncan Malins who on the corner just up from the Hamilton Square railway station handed the Flame over to Becki Blacklock who then carried it into the jetty at the Woodside Ferry terminal.  Becki Blacklock is 19 and is from the Wirral and she was selected through Lloyds TSB for her dedication and commitment with over 400 hours of voluntary work in the local community.

I didn’t manage to get a decent picture of Duncan and I only managed to get a photo of his handover of the Flame from the back of the crowd.

I did manage to get a photo of Becki as she ran down Hamilton Street toward the ferry terminal.

Down by the Woodside Ferry terminal the crowd was out in force.  Becki handed the Flame onto Craig Lundberg from Liverpool who carried it onto the ferry for the crossing of the Mersey on the ferry boat the Royal Iris.

The Royal Iris set out to the Liverpool Pierhead with a small flotilla of vessels escorting it across the river in bright evening sunshine.  The deck was crowded with civic and other dignitaries and I believe Gerry Marsden from Gerry and the Pacemakers was on board.  Gerry’s anthem ‘Ferry Cross the Mersey’ plays on board the ferry every day on the short trip across the water. 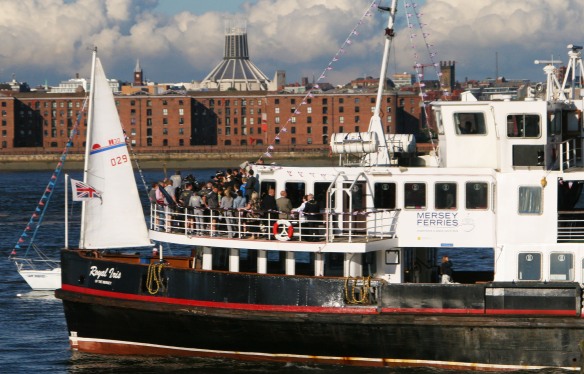 Craig was blinded whilst on service in Iraq in 2007 when a rocket propelled grenade blew up in his face. Since his injuries Craig has done many many things including playing for the England blind football team, climbed Mount Kilimanjaro for the Help the Heroes charity, worked in the community giving inspirational speeches to children and is a support to other wounded servicemen, he is also hoping to participate in the Paralympics in the GB blind football team.

At the Evening Celebration at Liverpool’s Pierhead, Craig lit the cauldron to mark the culmination of the day’s festivities.  After the celebrations finished the Flame was transferred to a lantern and it stayed in Liverpool overnight.  For Day 15 the Flame was flown out to the Isle of Man early on Saturday morning to continue its journey across every part of Great Britain.

Wirral Council estimates that around 60,000 people lined the relay’s route with 25,000 filling Birkenhead Park for the festival of sports and fitness.

The torch has 55 more days to go before the opening ceremony in London on 27th July.