Carlisle is my home town but I’ve lived in Wirral for much longer now since I left Carlisle to go to college in Sheffield in 1975.  I don’t get back to visit Carlisle very often.  We got there for a day in October 2012 and had some time to explore some of the historic buildings in the town centre.

Carlisle has a varied history.  It started as a Roman settlement known as Luguvalium which was established to serve the forts on Hadrian’s Wall which separated the Roman Empire from the marauding Picts and Scots in what is now Scotland.  Wars between England and Scotland continued to shape the city’s history as a frontier town.

I managed to get a few photographs of some the buildings associated with the city’s long history.

During the Middle Ages, because of its proximity to the Kingdom of Scotland, Carlisle became an important military stronghold.  Carlisle Castle was built in 1092 by the son of William the Conqueror, William Rufus.  It once served as a prison for Mary, Queen of Scots. The castle now houses the Duke of Lancaster’s Regiment and the Border Regiment Museum.

One of the most important battles for the city of Carlisle and its castle were during the second Jacobite uprising against George II in 1745. The forces of Prince Charles Edward Stuart (better known as Bonnie Prince Charlie) travelled south from Scotland into England reaching as far south as Derby. Carlisle and the castle were seized and fortified by the Jacobites. However they were driven north by the forces of the Duke of Cumberland, the son of George II. Carlisle was recaptured, and the Jacobites were imprisoned in the dungeons where they were starved of food and water before being executed.In the dungeons of the castle you can still see the ‘licking stones’ where the prisoners licked the damp sandstone to get some moisture. Bonnie Prince Charlie escaped back to France. 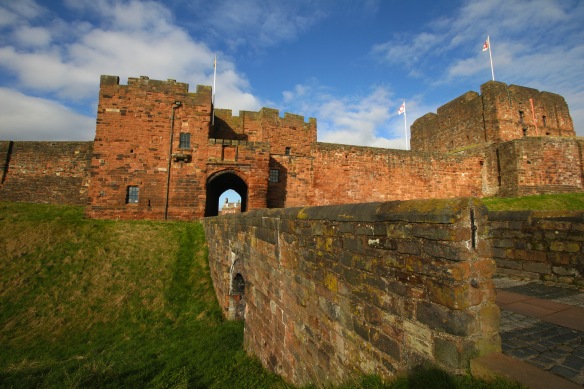 In the early 12th century King Henry I allowed the foundation of a priory in Carlisle. The town gained the status of a diocese in 1122, the Augustinian Priory became Carlisle Cathedral and the town was granted city status in 1158.  Carlisle Cathedral is the second smallest after Oxford of England’s ancient cathedrals. Its notable features include fine figurative stone carving, a set of medieval choir stalls and the largest window in the ‘Flowing Decorated Gothic’ style in England in its East Window which is 51 feet high and 26 feet wide and still contains much of its original medieval glass. 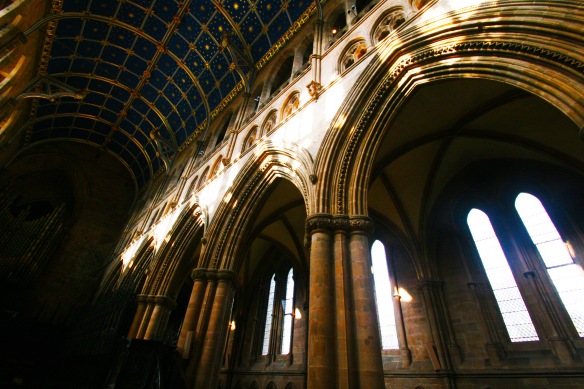 Castle Street connects the Cathedral to the Castle and between the two is Tullie House Museum.  It was opened as a museum by the then Carlisle Corporation in 1893 when it converted the original building from a Jacobean mansion house.  A new range of buildings including the round ‘citadel’ style entrance was added in 1989-90 to create new galleries and related facilities.  In 2000-1 the Carlisle Millennium Gallery was created, which extends below the A595 dual carriageway on the north side of the museum. A public walkway connecting Castle Street to the Castle Green and the castle, runs alongside this and features public artwork including the cursing stone I describe below.

The museum houses the Human History Collection, most notable for antiquities associated with Hadrian’s Wall and the two Roman forts established in Carlisle. It also has large and varied collections of zoological, botanical and geological material, as well as fine and decorative arts collections 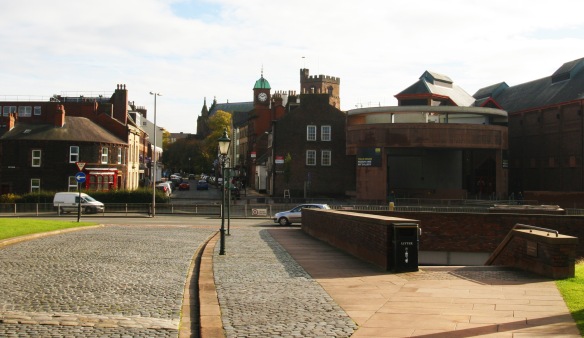 Outside the museum on the pavement of northern Castle Street is a Hadrian’s Wall feature paving which has engraved black and grey granite slabs showing the forts and other settlements along the wall set against the Cumbrian red sandstone pavement.

Whilst walking along Castle Street I couldn’t help but notice the hairdresser’s shop with a smartly dressed member of staff wearing a black bow tie who seems more interested in what’s going on outside the shop. 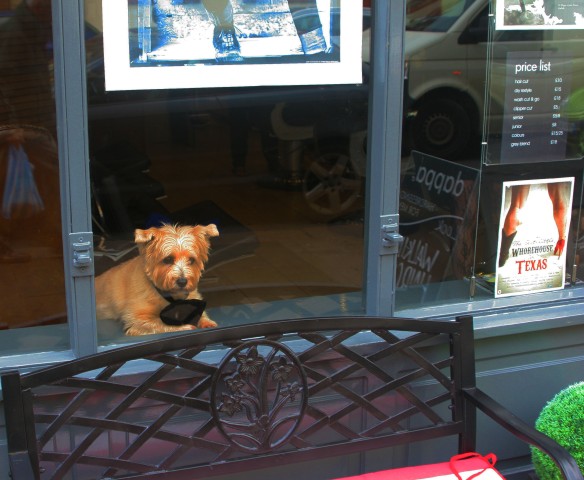 The Border Reivers and the Cursing Stone

An interesting sculpture is found in the underpass between Carlisle Castle and Castle Street alongside the Tullie House Museum Millennium Gallery.  The sculpture illustrates one of the areas particularly bloody periods.

From the tenth through to the sixteen century there were a series of wars between Scotland and England which saw the region centred around Carlisle change hands a number of times.  During the wars, the livelihood of the people on the borders was devastated by both countries’ armies.  Even when the two countries were not at war there were tensions as in any frontier lands we see today.  These were the ‘debatable lands’ and the communities living here fought for their own security and wellbeing and they improved their livelihoods at their enemies’ expense. These peoples were known as the ‘Border Reivers’ and Carlisle was the major city within their territories.

The Reivers carried out raids across the area stealing cattle and pillaging and became so much of a nuisance to both the Scottish and English governments that in 1525 the Archbishop of Glasgow, Gavin Dunbar, cursed all the Reivers of the borderlands. The curse was detailed in 1,069 words.

There is a really interesting Reivers exhibition inside Tullie House Museum but for the millennium celebrations in the year 2000 the City Council commissioned a 14-tonne granite artwork inscribed with all 1,069 words of the curse and this is displayed in the  underpass walkway.  The stone is set on granite tiles which have been engraved with the names of Reiver families, which as you can see from the photograph include families such as Simpson, Thomson and Watson.

The Guildhall on the Greenmarket

The medieval Guildhall building was home to Carlisle’s ancient trade guilds and is now a museum of civic history.  The half-timbered building dates from the late 14th century which was originally built as a private house for Richard of Redness.  Richard left the house to the city in his will and it became a meeting point for various trade guilds in the city. Carlisle had 8 guilds covering the trades of butchers, merchants, cordwainers (shoemakers), glovers (including skinners), smiths, tailors, tanners and weavers, with each using a different room in the Guildhall as a meeting place. 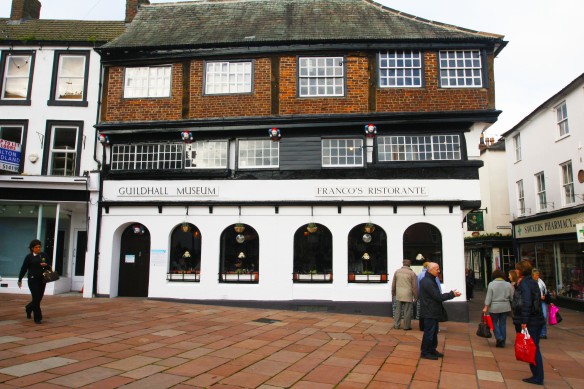 Each Guild had its own rituals and rules and many of their treasures can be seen on display in the Guildhall.  The traditional Ascension Day celebrations, 40 days after Easter, are still marked with the hanging of the Guild banners.

Today, the Guildhall is a museum and it houses treasures such as the great iron-clad chest that stored the city’s documents, the medieval stocks and the unique Carlisle Bells (the oldest horseracing prizes in England).  It is Carlisle’s oldest domestic city centre building having survived largely intact through wars, fires and re-building.

The old town hall was originally built in 1668-9 on the site of a medieval moot hall.  It was added to and altered in 1717 and in the 19th century.  It now houses the tourist information service on the first floor and has shops on the ground floor.  The building contains the names and dates of seven of the City’s mayors with Christopher Ling appearing on one the side of the town hall clock as this photograph shows taken from St Albans Row.

Across from the town hall is Carlisle Cross, Market Cross, or Carel Cross which was erected in 1682 on the site of an older medieval cross.  It marks the point where the A6 from London (English Street) meets the A7 from Edinburgh (Scotch Street).  It has a lion on top which has one of its paws on the ‘dormant book’ of the city containing the city’s charter, below this are four sundials one on each side of the cross.  Within the City’s charter is a proclamation which declares the City Council’s rights to hold an annual Fair in August, originally granted to the citizens of Carlisle in 1352 by Edward III with the City holding its first official fair, Carel Fair, in 1353.  In the older times on market days which were Wednesday and Saturday, market stalls would be erected around the market cross until the covered market was built in the late 18th century in nearby Fisher Street. 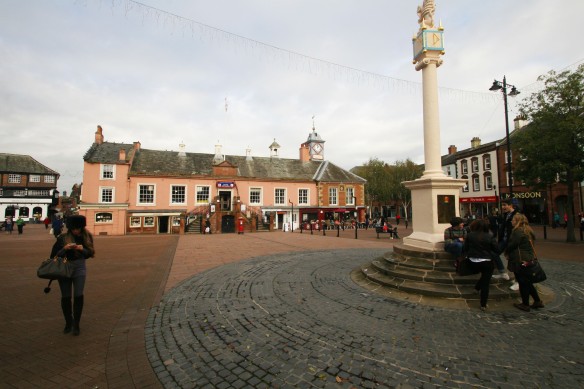 When Bonnie Prince Charlie invaded the city in 1745 he proclaimed his father King in the marketplace between the town hall and the Carel Cross.

Carlisle United is the city’s football team who currently play in the Football League Division Two.  The club was founded in 1903 on the amalgamation of Carlisle Red Rose and Shaddongate United and has played at Brunton Park on Warwick Road since 1909. The club joined the Football League in 1928 and won promotion to the top flight (then the Football League First Division) in 1974. The club topped the English league after winning its first three games of the 1974-75 season, but failed to keep up its good form and was relegated after just one season.

Outside the ground is a statue unveiled in 2005 of Hughie McIlmoyle who played as centre forward in three spells for the club including the 1974/75 season in Division 1.  He scored 76 goals for the club and he was voted the fans favourite player of all time.

There is a lot more history to discover in the City and hopefully I’ll be able to catch up on these next time I visit.