Driving through Liverpool recently on my way to the M62 I came across a surprising vista. Liverpool and Manchester made a joint bid last year to fund a project called a ‘Tale of Two Cities’; with the aim to have wildflowers planted in inner-city areas.  As part of the scheme for Liverpool, the project organisers have created a wildflower corridor along the Islington central reservation, leading up towards Everton Park.

The two cities bid for the £120,000 funding available through the national ‘Grow Wild’ scheme.  ‘Grow Wild’ is a £10.5m campaign to bring people and communities together to sow, grow and support UK native wild flowers. It is funded by the Big Lottery Fund and led by the Royal Botanic Gardens, Kew, in London.  ‘Grow Wild’ has been set up to inspire people to get together to transform unloved urban sites, gardens and windowsills into wildlife-friendly wild flower patches. Liverpool and Manchester wanted to deliver a distinctive cultural wild flower project to connect two historically divided cities, blending pathways into the two cities with environment and culture. Their proposals have been supported by the National Wild Flower Centre, the National Trust and the two city councils.  More details can be found at http://www.growwilduk.com

The idea was that Everton Park in Liverpool and Hulme in Manchester will make bold statements by transforming large areas of neglected space and unloved verges into magical displays of wild flowers. The local communities in each area share many cultural and historic similarities.

In Liverpool, derelict and paved areas of Everton Park have been planted with wild flower displays, some marking demolished streets and the central reservation on Islington.  In Manchester, wild flower landscapes have be created along Princess Road and its linked surroundings to be seen by 100,000 passers-by daily on their way in and out of the city centre each day.

Planting events, cultural exchanges in each city and coming together at music and art festivals organised by the people of Everton and Hulme have all been planned to take place in the wildflower areas that they have sown and cared for.  Community leaders will continue to meet through events across the two cities.  The hope is that an imaginative working relationship between the two historic rivals will be a roadmap for others to follow.

Richard Scott, senior project manager at conservation charity Landlife, who coordinated the Tale of Two Cities bid, said that the plan was to ensure maximum visibility for commuters and local communities by placing wildflowers in highly visible and unexpected urban spaces.  The Grow Wild competition was decided by a national online vote that was decided in November last year.  Liverpool and Manchester were chosen against strong competition from the London Borough of Newham, Bristol, Plymouth and Sheffield. 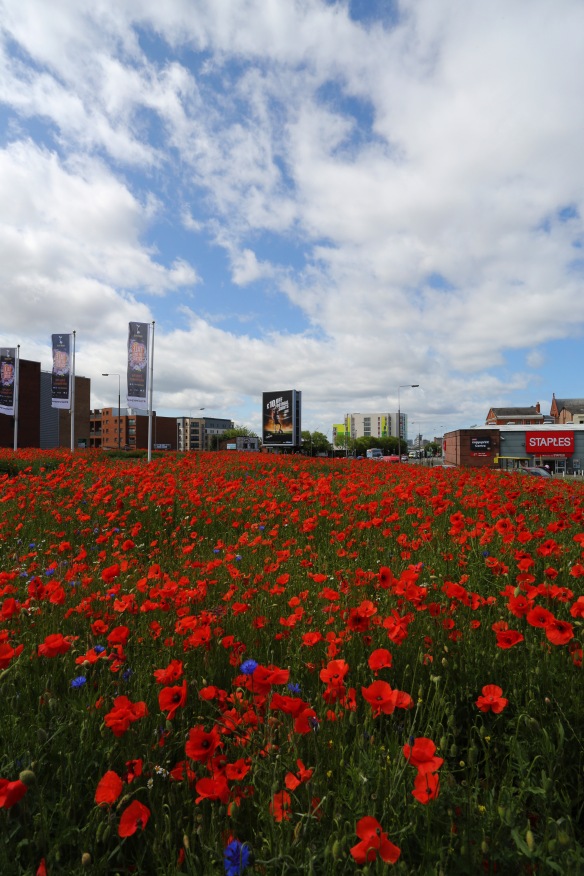 As you drive up Islington from the city centre you can’t miss the planting and the colour of the wild flowers which as I came to see them were mostly poppies giving a bright red carpet set against the cityscape down the hill.  Like Princess Road in Manchester thousands of people commute up and down Islington each day and the show of wildflowers there is unexpected and quite spectacular as I found them.