At the weekend I walked around Thurstaston Common a part of West Wirral popular with walkers and outdoors enthusiasts.  The weather was not the best for taking photos but there was a weak winter sun in between the showers and dark clouds and foreboding skies in the late afternoon.

Thurstaston Common is a unique area which together with the adjacent Royden Park comprises an area of almost 250 acres (100 hectares) of parklands, woodland and natural heathland.  It is a Site of Special Scientific Interest and is a Local Nature Reserve.  The site is jointly owned by Wirral Borough Council and The National Trust and is managed by Wirral Rangers. 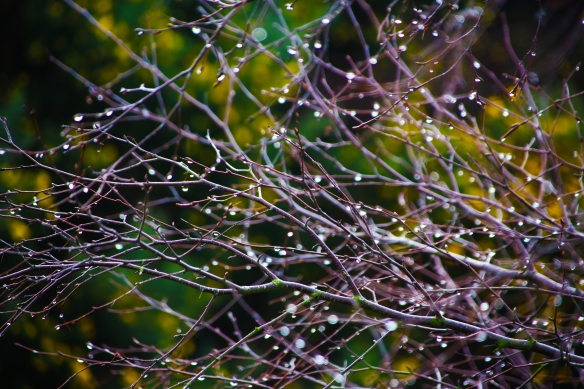 Starting from Telegraph Road you are soon at the top of Thurstaston Hill which is a modest 298 ft (91m) in height.  But it offers extensive views across the Wirral Peninsula and beyond.

On one side there are views of the Dee Estuary (itself a Site of Special Scientific Interest) and over the River Dee to the Clwydian Hills of North Wales.

If you look closely enough you can make out the Point of Ayr on the North Eastern corner of the North Wales coast with the Great Orme in Llandudno behind it. 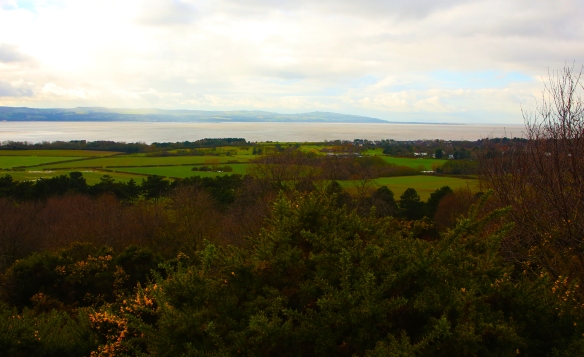 On the other side of the Wirral peering toward Birkenhead you can see Arrowe Park Hospital in the near distance with the City of Liverpool in the far distance with both cathedrals and various city centre tower blocks being visible.

Further round are the docks at Seaforth and the newly installed giant red cranes which are part of the new £400m Port of Liverpool terminal 2 development. 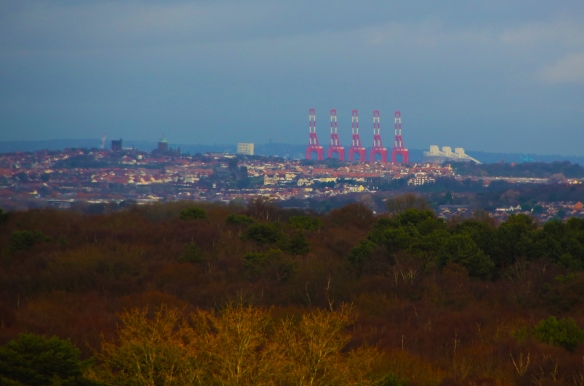 On the third side of the peninsula are the towns of Hoylake, Moreton and Leasowe with Liverpool Bay beyond them and the wind turbines at Burbo Bank offshore wind farm at the entrance to the Irish Sea.

The clear white painted Leasowe Lighthouse shines like a beacon but while it no longer safeguards the Wirral coast it leads the eye out to the far coast of the Mersey which extends from Crosby through to Formby Point.

In clear weather, Snowdonia, the Pennine Hills, the Lake District are all visible but not today.

A brass viewfinder plate was installed on top of the Triangulation point column on the Hill in memory of Andrew Blair, founder of Liverpool and District Ramblers Association to help visitors find their bearings.  However the brass map was stolen from the viewing point in August 2016 and has not been found.  Wirral Council has promised to install a replacement plaque to be produced using photographs of the original brass map.  To this end the Council has appealed to members of the public to provide information or photographs of the original design. 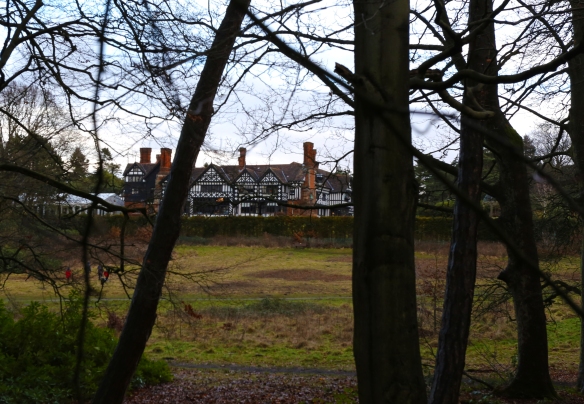 As you approach Royden Park from Thurstaston Common you can see the Grade II listed building of Hillbark reputed to be one of the finest examples of Victorian half-timbered designed buildings. The house was originally built in 1891 for the soap manufacturer Robert William Hudson on Bidston Hill.  In 1921 the house was sold to Sir Ernest Royden, and he arranged for the house to be dismantled and rebuilt on the present site, at Royden Park, between 1928 and 1931.  Sir Ernest Royden died in 1960 and left the house to the local council and up until the mid-1980s it was used as an old people’s home.  It closed in 1984 and fell into disrepair until in the early 2000s it was converted into a five star hotel.

In the middle of the common is a relatively new memorial stone erected last year.  Sir Alfred Paton gave Thurstaston Heath to the National Trust in memory of his brother, Captain Morton Brown Paton and the other men of The Wirral who died in the Great War 1914-18.  Captain Morton Brown Paton served with the South Lancashire Regiment and he died in action on 7 August 1915 age 44 at Helles, Turkey.  He was a successful cotton merchant in Liverpool.   The plaque on the memorial marks the anniversary of the family’s donation to the National Trust. The habitat of the Common varies from mixed woodland dominated by birches, oak, sycamore and rowan to wet and dry heathland.  Locally rare plants such as marsh gentian, oblong-leaved sundew and round-leaved sundew are found on the common. Animals include common lizard, dragonflies and birds such as yellowhammer and meadow pipit feed and nest in the heather.  Tawny owl, jay, sparrowhawk and woodpeckers can also be sighted in the pine plantations.  Today as I sat on the hill an inquisitive Robin nestling in the gorse, which was out in full bloom, was my main sighting of the local wildlife. 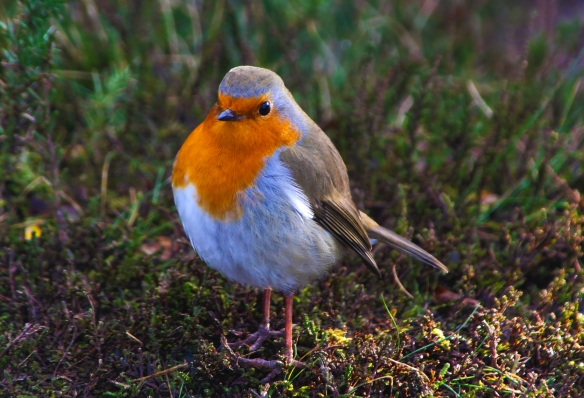 Within the Common close to Thurstaston Hill is the location of Thor’s Stone, a place of ancient legend.  Thor’s Stone is a large rectangular red sandstone outcrop that is around 50 feet in length, 30 feet wide and 25 foot high which has been eroded over thousands of years.

This part of Wirral was settled by the Vikings as part of a Norse colony centred on Thingwall which was the local parliament in the 10th and 11th centuries and local folklore says that the rock is named after the Norse thunder god Thor.  Viking settlers according to legend used the stone as a pagan altar when religious ceremonies were held here at Thor’s Stone.  The stone was also known locally as ‘Fair Maiden’s Hall’.

This is a fascinating period of Wirral’s history.  The Vikings began raids on the Wirral towards the end of the ninth century, travelling from Ireland; they began to settle along the River Dee side of the peninsula and along the sea coast.  The settlement of the Wirral by the Vikings was led by Ingimund, who had been expelled from Ireland in around 902 and gained permission from Ethelfleda, Lady of Mercia and daughter of King Alfred the Great, to settle peacefully on the peninsula.  Most of the village names around the peninsula derive from ancient Norse. 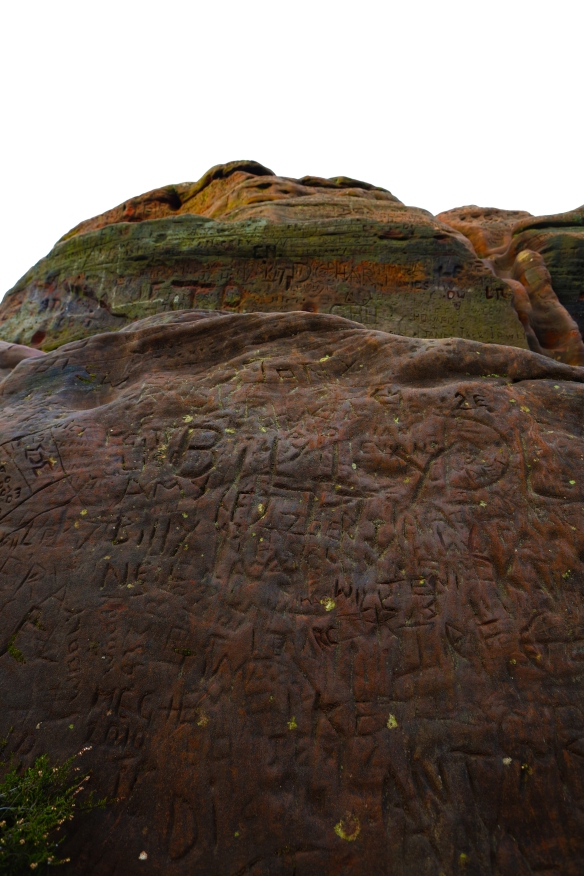 Geologists and historians now think that Thor’s stone is a natural formation similar to a tor, arising from periglacial weathering of the underlying sandstone with the rock being moulded by water flows under the ice at the end of the last Ice Age.  It was later exploited by quarrymen in the 18th and 19th centuries and weathered by subsequent erosion.  The small pool to the left of Thor’s Stone is one of the wetland areas to be found on the heath.

Today the soft sandstone has been an easy rock for countless people to have carved their names or messages into for posterity.  There is not an inch of it which doesn’t appear to have been carved upon.

The top of Thor’s Stone can be reached by a choice of easy scrambles up the heavily eroded rock. The outlines of 230 million year old sand dunes can be detected in the rock layers, a reminder that the area was an equatorial desert in the Triassic period.

From Thor’s Stone it was a short walk back to Thurstaston Hill and back down the other side to the car park on Telegraph Road. 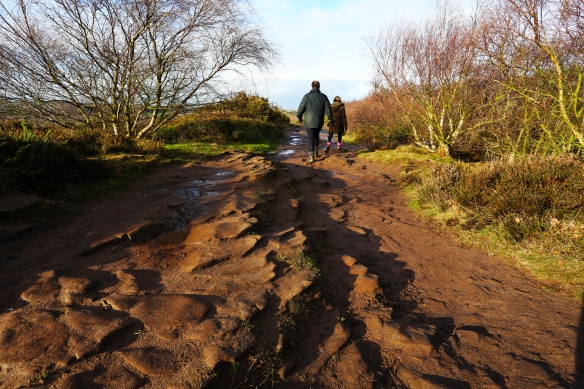