The Parade of Giants took place on Sunday 8th September in Hamilton Square, Birkenhead.  This was the first year the event had been staged.  The parade started at the corner of Hamilton Square and crossed the gardens before gathering in front of the old Town Hall under the watchful gaze of royalty. 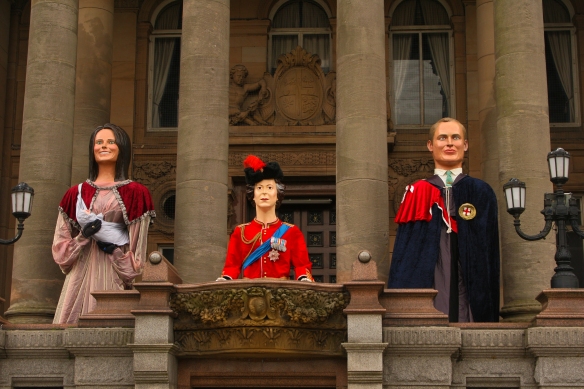 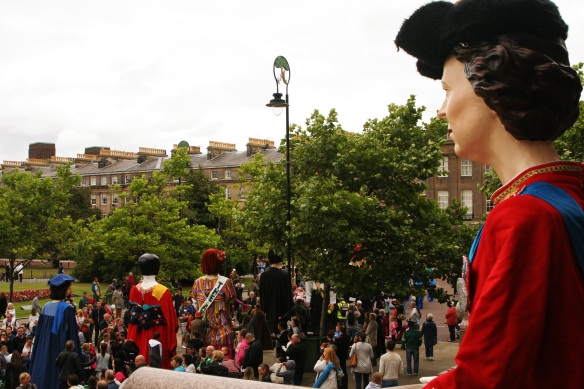 The Wirral Samba band led over 20 Giants including four representing Wirral’s own local ‘Giants’. The 16 other giants were provided by ‘Chester City of Giants’.  All the giants then went on show in the town’s Pyramids shopping centre. 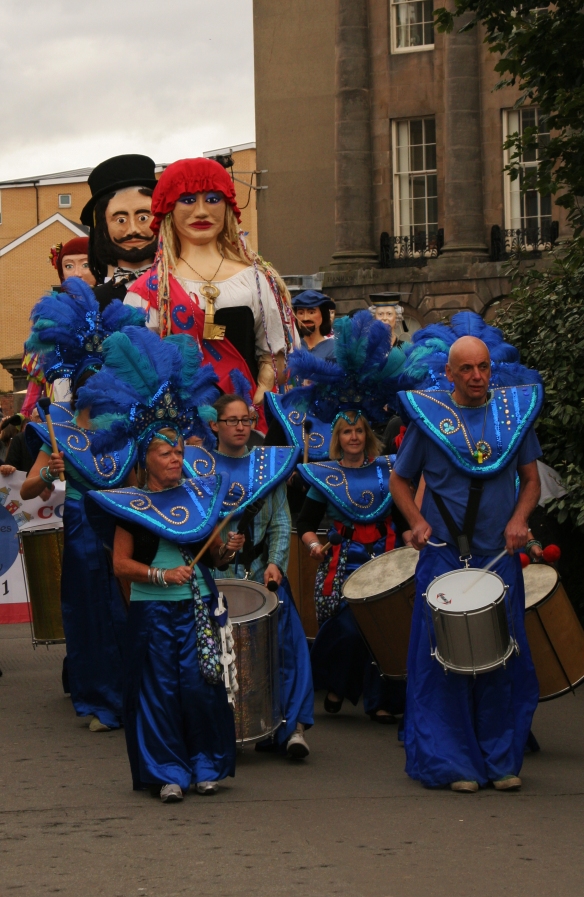 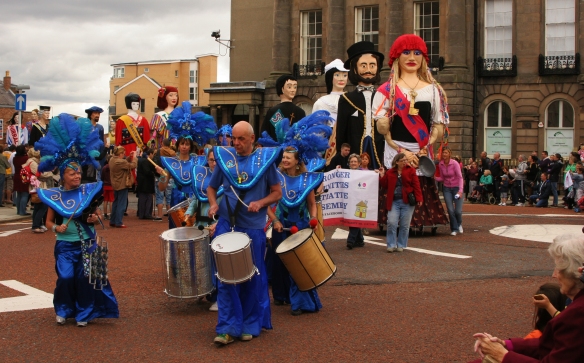 All the Giants were ‘walked’ by local organisations, community groups and businesses. These included Magenta Living, Cammel Laird, Forum Housing, YMCA, Beechwood Trust, the Shaftsbury Centre, Wirral Met College and Wirral Churches Ark Project to name the ones I could identify. 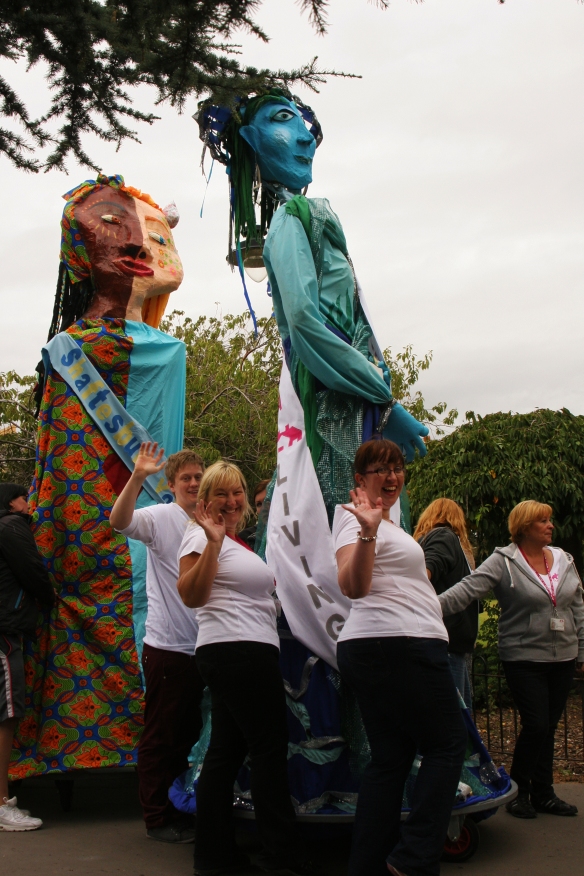 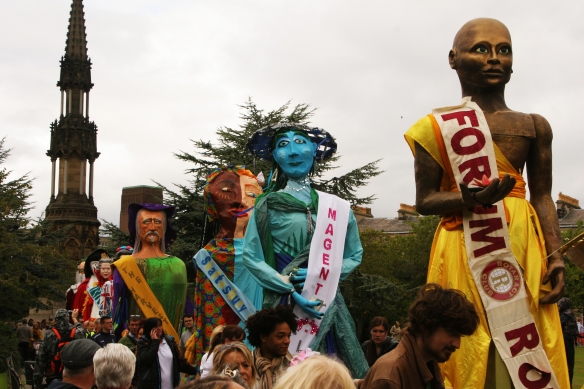 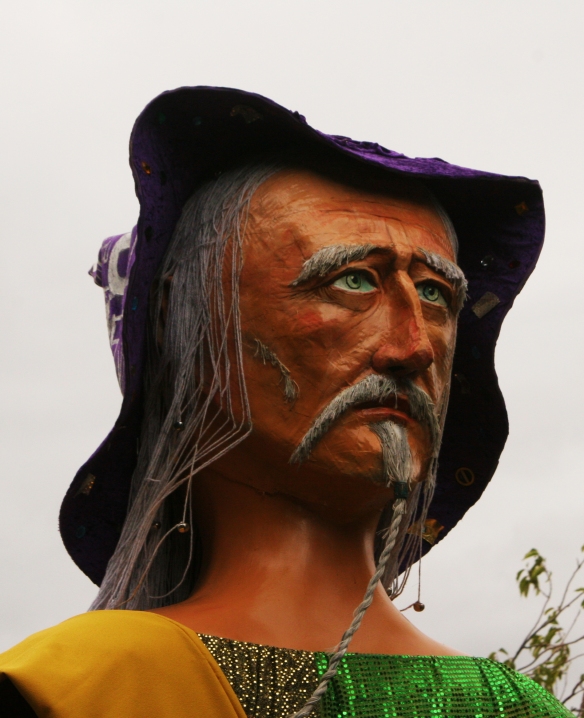 The parade was organised by local volunteers with the help and expertise of the Chester City of Giants who are a community interest company, encouraging ‘social enterprise through creativity’.  They offer training and experience and encourage inclusivity and teamwork whilst having fun.  Throughout August the Giants ran workshops in the local shopping precinct allowing volunteers to work with professional artists to make the giants for the parade.  The Chester Giants (‘Chester: the Giant City’ www.thegiants.org.uk) were formed a few years ago and they have re-enacted the spectacular parades that took place in Chester for hundreds of years, which were originally based around the famous Mystery Plays which were organised by the old local ‘City Guilds’.  These parades featured fabulous creatures and giants and the modern event celebrates this heritage by putting on show with a cast of giants, fantastic beasts, musicians and dancers in a colourful display around Chester’s city streets. 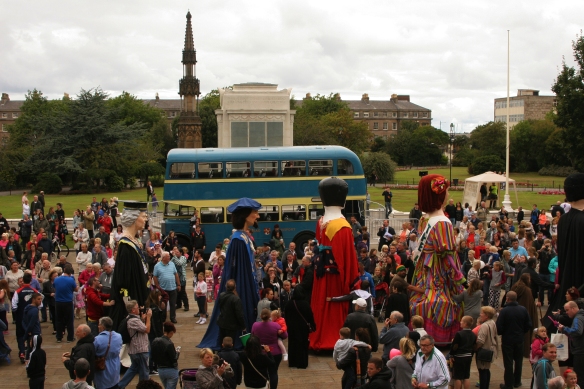 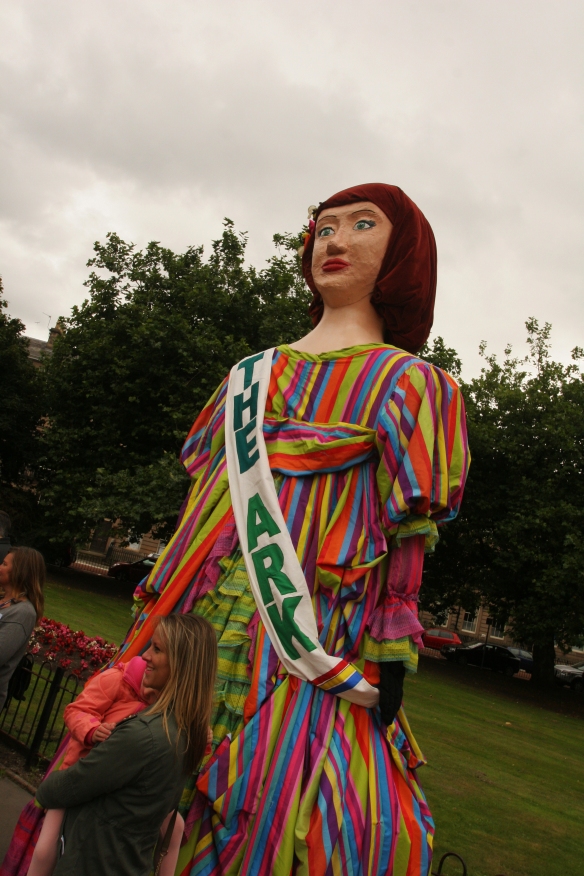 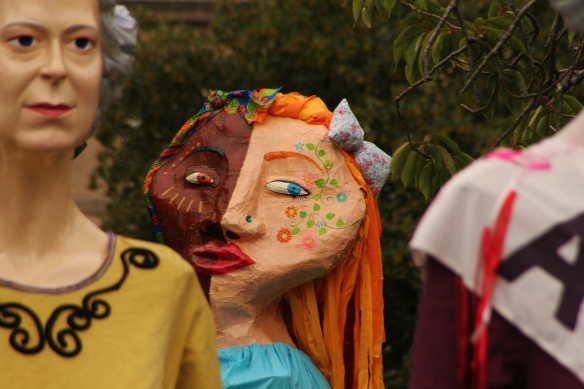 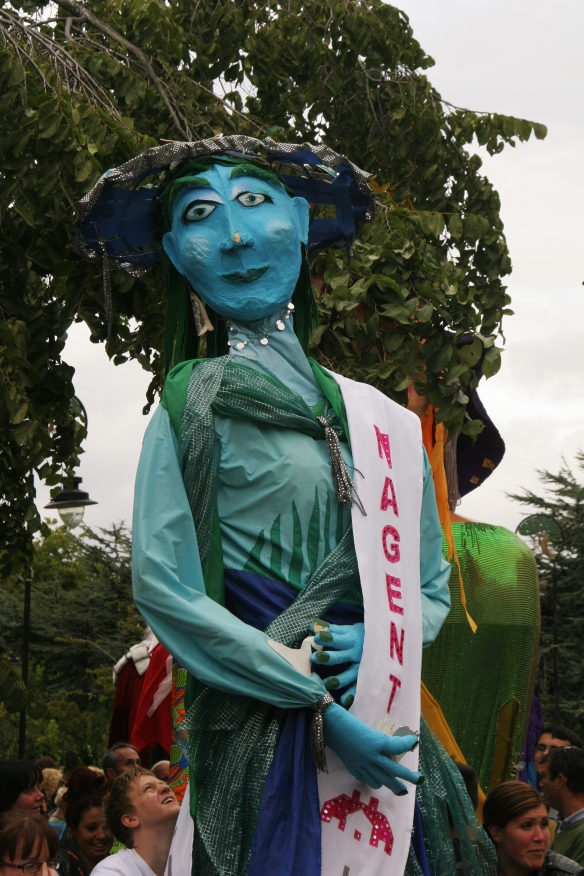 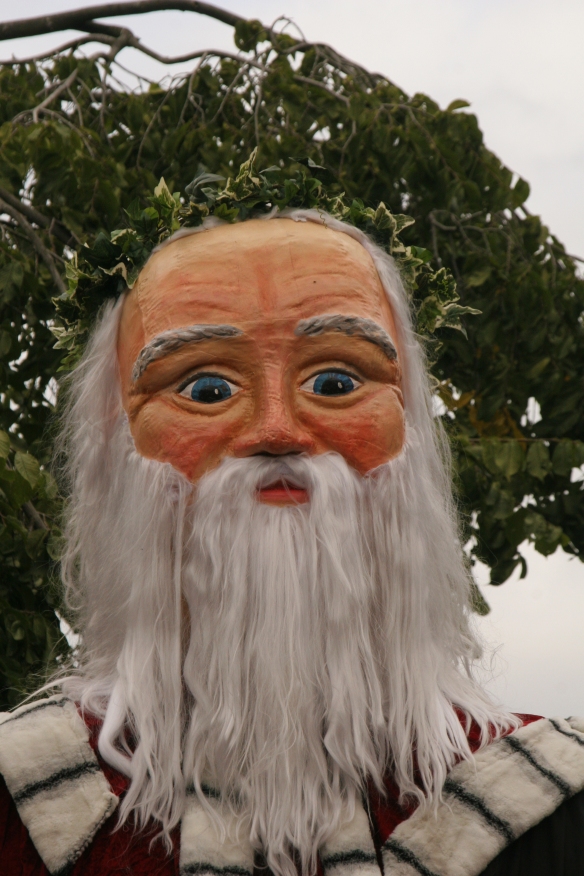 The famous Wirral giants included Old Mother Redcap.  She was ‘Poll’ Jones an infamous innkeeper in the 1770s of an inn between New Brighton and Egrement in Wallasey.  Poll Jones always wore a red hood or cap and this gave the inn its nickname ‘Mother Redcap’s’.  The inn was on the coast which was cut off from the rest of Wirral by Bidston Moss and it became a notorious haunt of smugglers and their contraband. Underground passages were reputed to link it with different parts of New Brighton. It was well known for its strong, home-brewed ale and the sailors trusted Old Mother Redcap to look after their wages while they were at sea. They also used to hide here to escape the Press Gang. It was rebuilt in 1888 and demolished in 1974 as it had become badly vandalised. 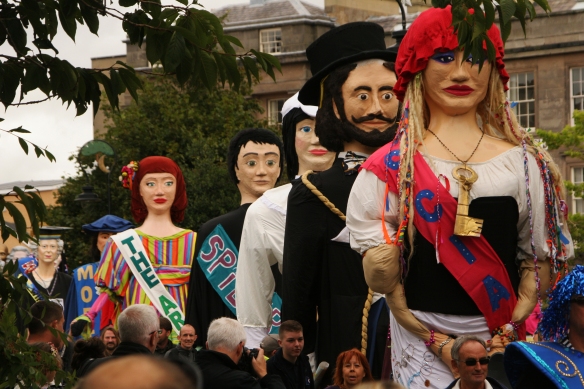 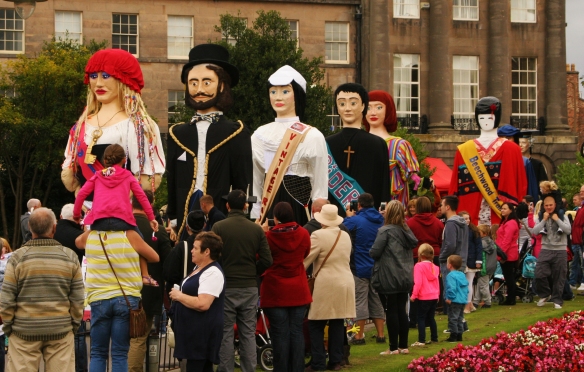 Another Giant was Lottie Dod was born in Bebington into a wealthy family who made a fortune in the cotton trade.  She was an outstanding sportswoman. She won the Wimbledon Ladies’ Singles Championship five times, the first one when she was only fifteen in the summer of 1887.  She remains the youngest ladies’ singles champion.  She also won the British Ladies Amateur Golf Championship, played twice for the England women’s national field hockey team (which she helped to found), and won a silver medal at the 1908 Summer Olympics in archery. The Guinness Book of Records named her as one of the most versatile female athletes of all time. 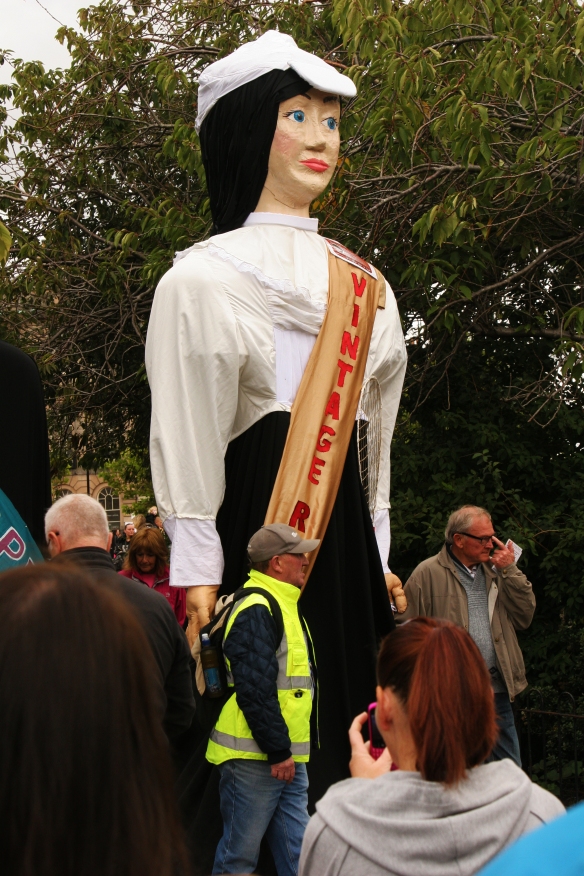 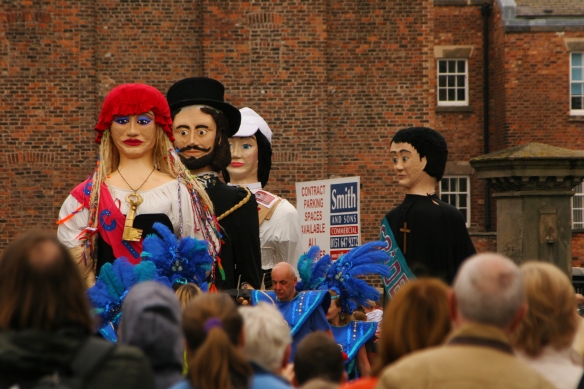 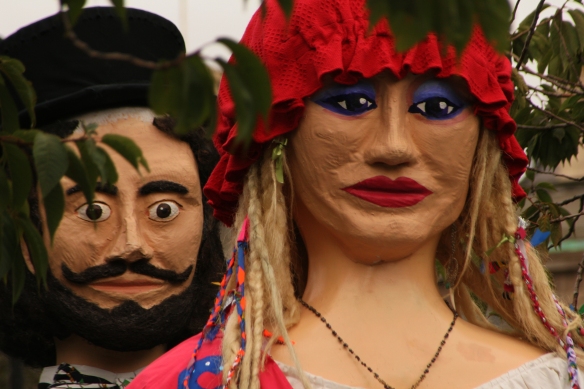 John Laird whilst being born in Scotland was a true local giant.  He moved to Birkenhead in 1824 where his father William Laird established the Birkenhead Iron Works which manufactured boilers.  John Laird joined his father to found William Laird & Son a shipbuilding company.  John Laird realised that the techniques of making boilers by bending iron plates and riveting them together could be used to build ships and he was one of the first to use iron in the construction of ships.  The business was taken over by his sons and it merged with Charles Cammell & Co to form Cammell Laird in 1903 as it is still known today.  He was the first mayor of Birkenhead and was chairman of the Birkenhead Improvement Commission which was appointed to erect a market, to light and clean the streets and to maintain a police force in the town.  When Birkenhead became a Parliamentary Borough in 1861, he retired from shipbuilding to become its first Member of Parliament. He served from 1861 to 1874 as a Conservative. He contributed a great deal to the continuous improvement of the town as a generous benefactor.  He made donations for the erection of Saint James Church, the Borough Hospital and the Laird School of Art.  He died at his home at 63 Hamilton Square following a riding accident and he is buried in the grounds of Birkenhead Priory, next to his yard and his statue now stands in Hamilton Square.

The final local giant represented a priory monk.  The monks formed one of the earliest communities in the Wirral.  Birkenhead Priory is the oldest standing building on Merseyside.  It was founded in about 1150 by Hamon de Masci, 3rd Baron of Dunham Massey for the Benedictine Order.  The Priory was visited twice by Edward I due to its strategic importance being close to the borders of Wales and the Irish Sea.  In 1318 the monks from the Priory were granted ferry rights by Edward II. The monks of the monastery looked after travellers for nearly 400 years and supervised the first regulated ferry across the Mersey.  They would provide travellers shelter if the weather was too bad for the ferry to cross the River Mersey. 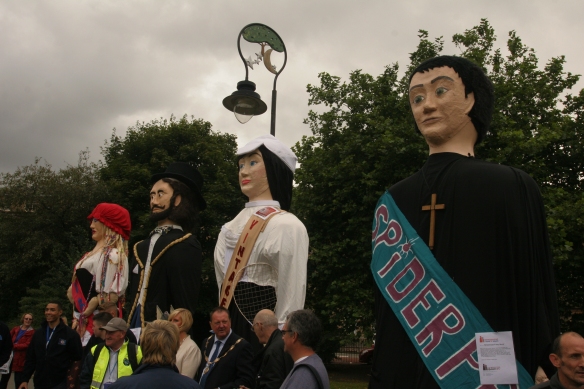 The Deputy Mayor of Wirral Councillor Steve Foulkes visited the volunteers and their Giants. 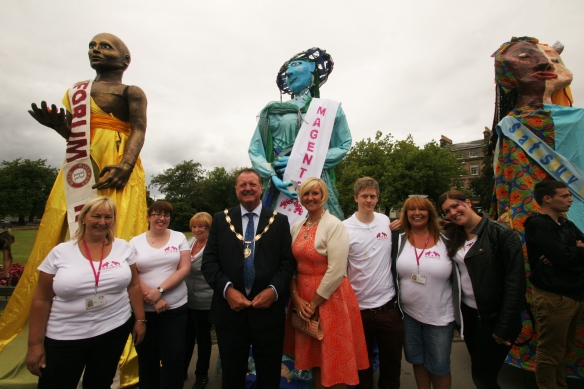 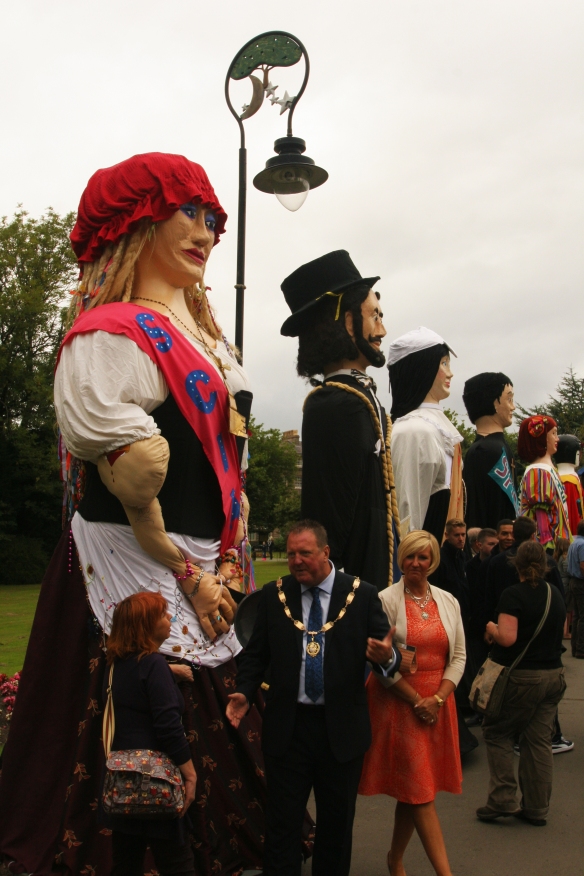 The rain managed to keep away whilst I was there but I’m told by the afternoon the heavens opened.  I’m not sure if this event is happening again next year but it did bring the crowds into the historic Hamilton Square in the heart of Birkenhead and I lost count of the number of Queen Elizabeth IIs who were on the parade. 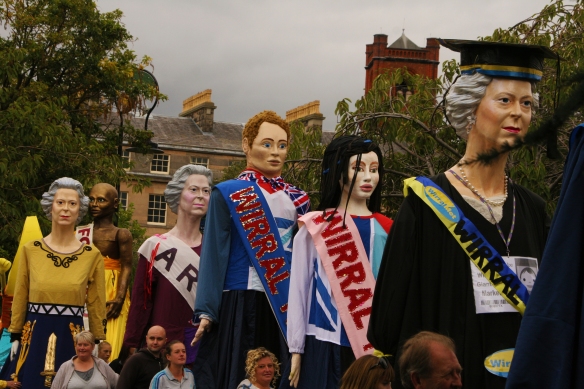